The impact factor is academia’s worst nightmare. So much has been written about its flaws, both in calculation and application, that there is little point in reiterating the same tired points here (see here by Stephen Curry for a good starting point).

Recently, I was engaged in a conversation on Twitter (story of my life..), with the nice folks over at the Scholarly Kitchen and a few researchers. There was a lot of finger pointing, with the blame for impact factor abuse being aimed at researchers, at publishers, funders, Thomson Reuters, and basically any player in the whole scholarly communication environment.

As with most Twitter conversations, very little was achieved in the moderately heated back and forth about all this. What became clear though, or at least more so, is that despite what has been written about the detrimental effects of the impact factor in academia, they are still widely used: by publishers for advertising, by funders for assessment, by researchers for choosing where to submit their work. The list is endless. As such, there are no innocents in the impact factor game: all are culpable, and all need to take responsibility for its frustrating immortality.

The problem is cyclical if you think about it: publishers use the impact factor to appeal to researchers, researchers use the impact factor to justify their publishing decisions, and funders sit at the top of the triangle facilitating the whole thing. One ‘chef’ of the Kitchen piped in by saying that publishers recognise the problems, but still have to use it because it’s what researchers want. This sort of passive facilitation of a broken system helps no one, and is a simple way of failing to take partial responsibility for fundamental mis-use with a problematic metric, while acknowledging that it is a problem. The same is similar for academics.

@Protohedgehog @scholarlykitchn @tpoi as stated earlier, it's not a publisher problem. It's an academic problem. Just stop using it.

Oh, I didn’t realise it was that simple. Problem solved.

Eventually, we agreed on the point that finding a universal solution to impact factor mis-use is difficult. If it were so easy, there’d be start-ups stepping in to capitalise on it!

@Protohedgehog If I had that answer I'd probably be helming a publishing startup.

(Note: these are just smaller snippets from a larger conversation)

What some of us did seem to agree on, in the end, or at least a point remains important, is that everyone in the scholarly communication ecosystem needs to take responsibility for, and action against, mis-use of the impact factor. Pointing fingers and dealing out blame solves nothing, and just alleviates accountability without changing anything, and worse, facilitating what is known to be a broken system.

So here are eight ways to kick that nasty habit! The impact factor is often referred to as an addiction for researchers, or a drug, so let’s play with that metaphor.

The Leiden Manifesto provides a great set of principles for more rigorous research evaluation. If these best-practice principles could be converted into high level policy for institutes and funders, with a major push for their implementation coming from the research community, we could see a real and great change in the assessment ecosystem. With this, we will see a concomitant change in how research develops and interacts with society. Evaluation criteria must be based on high quality and objective quantitative and qualitative data, and the Leiden Manifesto lays out how to do this.

The San Franciso Declaration on Research Assessment (DORA) was started in 2012 by a group of Editors and publishers of scholarly journals in order to tackle malpractice in research evaluation. It recognised the inadequacies of the impact factor of scientific quality, and provided a series of recommendations for improving research evaluation. These include: eliminating the use of journal-based metrics; assessing research based on its own merits;  and exploring new indicators of significance.

To date, 7985 individuals and 589 organisations have signed DORA. That is less than the number of researchers boycotting Elsevier, and the number of global open access policies, respectively, so there is still much scope for communicating and implementing these recommendations.

In 2015, a report called ‘The Metric Tide’ was published following an Independent Review of the Role of Metrics in Research Assessment and Management. This was set up in April 2014 to investigate the current and potential future roles that quantitative indicators can play in the assessment and management of research.

They found that peer review and qualitative indicators should form the basis for evaluating research outputs and individuals, with careful use of metrics as a supplement. This will help to capture more diverse aspects of research, and limit concerns arising from the gaming and mis-use of metrics such as the impact factor. They also advocated the responsible use of metrics based on dimensions of transparency, diversity, robustness, reflectivity, and humility – 5 traits, neither of which the impact factor possesses. 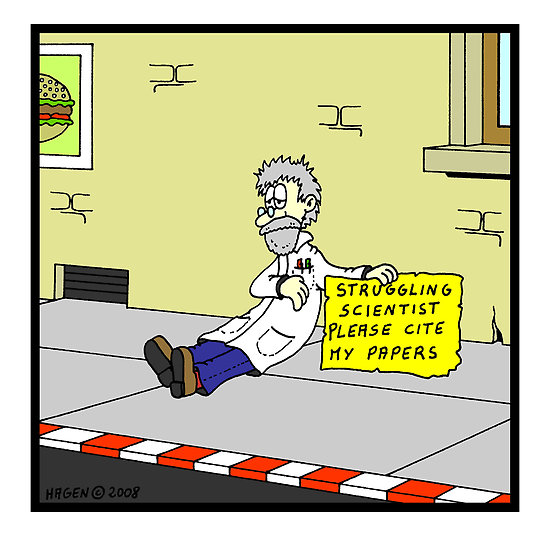 To summarise well-documented limitations of the impact factor (from DORA):

Recent research has also shown that impact factors are strongly auto-correlated, becoming a sort of self-fulfilling prophecy. It is deeply ironic that researchers, supposedly the torch-bearers of reason, evidence, and objectivity, persistently commit to using a metric that has been so consistently shown to be unreasonable, secretive, and statistically weak. To learn more, see Google.

Understanding thine enemy is the first step to being able to defeat them.

Knowledge is nicotine for researchers. There will never ever be a metric that surpasses the value of assessing the quality of a paper than reading it. ‘Read the damn paper’ has even become a bit of a rallying cry for the anti-impact factor community, which makes perfect sense. However, there are often situations on which assessment of huge swathes of papers and other research outputs has to be conducted, and therefore short-hand alternatives to reading papers are used as proxies to measure the quality of papers – such as the impact factor, or the journal title. This becomes a problem when quality and prestige diverge, as is very common, as they are no longer reflective of the same traits. Solutions exist, such as employing greater numbers of people in assessments, submission only of key research outputs, which enable the process of being able to digest the content of an article or other output and being able to make more-informed assessments of research. It is vastly unfair and inappropriate that researchers, funders, and other bodies are put in a position where they are unable to commit to these and forced to use inappropriate shortcuts instead. However, when time and volume is not an issue, there is simply no excuse for evaluating work based on poor proxies.

As someone who used to smoke, I finally quit by going cold turkey. Partially because I could no longer afford to keep up the habit as a student, but that’s besides the point. The point is to make a personal commitment to yourself that you will no longer succumb to the lures of the impact factor. Reward yourself with cupcakes and brownies. You owe it to yourself to be objective, to be critical, and to be evidence informed about your research, and this includes how you evaluate your colleagues’ work too. Commitments like this can be contagious, and it always helps to have the support of your colleagues and research partners. Create a poster like “This is an impact factor free work environment” and stick it somewhere everyone can see!

The first rule of impact factors is we don’t talk about impact factors (irony of this post fully appreciated). This is ‘how to kick an addiction 101’. When you quit smoking/drugs/coffee, the last thing you want is to be hanging around others who keep doing it. It’s bad for your health, and just drags you right back down the path of temptation. If someone insists on using the impact factor around you, explain to them everything in this post. Or just leave. They’re simply adopting bad practices, and you don’t want to or have to be part of that. If it’s your superior, a long frank discussion about about the numerous problems and alternatives of the impact factor is well worth your time. Scientists are well known for being completely reasonable and open to these sorts of discussion, so no problems there.

While this has sort of been covered by the first three points, but altmetrics, or alternative metrics are a great way of assessing how your research has been disseminated on social channels. As such, they are a sort of pathway or guide to ‘societal impact’, and provide a nice compliment to citation counts, which are often used as a proxy for ‘academic impact’. Importantly, they are at the article level, so do not suffer the enormous shortcomings of journal-level metrics such as the impact factor, and offer a much more accurate insight into how research is being re-used.

What other solutions can we implement in eliminating the impact factor, and making academic assessment and publishing a more fair, transparent, and evidence-informed process? The Metrics Tide report, DORA, and the Leiden Manifesto are all great steps towards this goal, but the question still remains of how we embed their recommendations and principles in academic culture.

We should be very aware that there is absolutely nothing to lose from employing these recommendations and partial solutions. What we can gain though is an enriched and informed process of evaluation, which is fair and benefits everyone. That’s important.

9 thoughts on “How can academia kick its addiction to the impact factor?”