Hi Kamel, and thanks for joining us here! Could you start off by letting us know a little bit about your background?

Thank you for interviewing me Jon and congratulations on receiving your hard-earned doctoral degree. Best wishes for the future. (Ed: Thank you!! 🙂)

I am Kamel Belhamel, full Professor of Chemistry at the University of Bejaia, director of the Laboratory of Organic Materials and Editor in chief of Algerian Journal of Natural Products (E-ISSN: 2353-0391). I graduated in Chemistry at the University of Setif- Algeria and achieved my PhD at the same University in the field of Process Engineering and Chemistry of Materials. I have taken part to several international projects such as: Italian project, German – DAAD, French- Algerian framework programme CMEP and co-ordinator of several Algerian national research projects, CNEPRU, PNR). My scientific activity is focused on the chemistry of macrocycles; Solvent extraction of metal ions from ores and waste solutions; Extraction and study of chemical composition from plant extract; Electrodeposition of metals and alloys. I am author/co-author of 20 scientific papers in international scientific journals and more than 50 abstract books in national and international conferences. I was Supervisor of many Master’s and 11 PhD students. I am a member of the Scientific Committee of the Faculty of Technology, the Algerian Chemical Society, and Training Manager of Master of Science: pharmaceutical processes at the University of Bejaia. Recently, I was appointed as the DOAJ Ambassador for North Africa.

I have heard about open access journals during my first scientific visit to Freie Universität, Berlin in 2000. When I selected an open access journal, Molecules, and edited by MDPI, in order to publish our research results, my friend, Prof. Rainer Ludwig, has refused to publish in this journal because, in this period it hadn’t obtained an impact factor and asked for high APCs (article-processing charges). One important element to keep in mind when discussing Open science, that this concept is very old. By the 12th century, Bejaia, my city was an important port and an open centre of science in the North Africa. The Italian mathematician Fibonacci (c. 1170 – c. 1250) has studied Arabic numerals and algebraic notation in Bejaia. He introduced these and modern mathematics into medieval Europe in his famous book Liber Abaci. Another influential North African Muslim thinker of the 14th century, Ibn Khaldun, has been extensively studied in the Western world with special interest. He has written a part of his famous Muqaddimah “Introduction” in Bejaia. This document, summarize his theories of the science of sociology, was the greatest legacy that he freely offered for all of humanity and the generations to come.

You recently were appointed as the DOAJ Ambassador for North Africa – congratulations! What sort of activities does this role entail? END_OF_DOCUMENT_TOKEN_TO_BE_REPLACED

The latest Open Science Stars interview couldn’t be better timed, as I’m sitting here with the interviewee, Bastian Greshake at OpenCon in Washington DC! Let’s get right to it!

Hi Bastian, and thanks for joining us here! Could you start off by letting us know a little bit about your background?

Sure! Right now I’m working on my PhD in bioinformatics at the University of Frankfurt, the city in the middle of Germany that is famous for having a more or less working airport. Before I transferred into being an armchair/standing desk biologist I did a Master’s degree in Ecology & Evolution. Much of my, maybe let’s say “traditional”, research is about how evolution has shaped the genomes of the funny living things around us. And then there’s the whole open* shebang, which we’ll probably talk about later.

I’m not really sure whether it was before or during my undergrad studies. I was certainly experimenting with open source software since I was 15 or so. For the open access-part I at least vividly remember one of the computational biology nerds sporting an open access-shirt, so I guess that way of advertising works. In any case, in my naivety I was puzzled and shocked that open science and science aren’t the same thing yet (c.f. this), as I would have assumed that academics would be progressive, being on the frontier of knowledge and all (boy, was I wrong!).

What is the state of ‘open science’ in the field of bioinformatics? Do you think it’s progressing faster or more frustratingly slower than other fields?

Bioinformatics is a pretty huge field, so I don’t really dare to speak for all of it. But at least for the part that I’m meddling in I think we’re doing a pretty good job open science-wise. Much of the data people generate is ending up in open repositories, virtually everything is programmed in open source programming languages and much of the written code ends up being open sourced as well. And there are some decent open access journals, with pre-prints becoming more and more accepted as well. Of course, it’s not perfect yet. Many people still seem to have a hard time to resist the siren song of Nature/Science publications and unfortunately it’s also the case that people still use and publish closed source and commercial software for their analysis. But hey, at least no one is seriously using Matlab.

END_OF_DOCUMENT_TOKEN_TO_BE_REPLACED

Thank you to everyone who applied for the latest round of ScienceOpen’s free indexing competition! Following the major success of the first round, we are pleased to announce that we will be offering free abstracting and indexing services for the following journals:

Free to publish OA journals offer an incredible service to the research community and broader public, with editors often working long hours with little-no compensation. We want to recognise this effort and reward it with free indexing on our platform! But why should journal editors care?

More visibility for your journal

To apply for the next round, an application form can be found here. Fill it out, and submit to our team. Simple, and hassle free!

Continuing the awesome Open Science Stars series, we spoke with Dr. Rachael Dunlop about her thoughts on scholarly communications. Rachael is such an awesome scientist, she has her own Wikipedia page!

Hi Rachael! Thanks for joining us here. Could you start off by letting us know a little bit about your background?

I was a late starter in science, having worked in graphic design and advertising as my first career. I went to uni aged 26 to get a science degree and emerged 8 years later with a PhD in Cell Biology. I originally planned to become a Virologist but my Microbiology lecturer was so awful, I switched to Toxicology. Funnily enough, I’d never done any Biology in high school so in first year uni, I had to borrow my sister’s year 12 text books to teach myself the basics of Biology – and now I’m a Biologist.

When did you first hear about open access and open science? What were your initial thoughts?

I can’t really recall but it would have been around the time I first started publishing and became aware that if you paid an exorbitant fee, then people could read your papers for free. Of course, researchers never ever have a spare USD3000 to throw around on publishing so it just always seemed out of my reach. It’s a great idea if you can afford it. As for open science, ideas are currency in research so there was never any discussion about participating in an open system.

END_OF_DOCUMENT_TOKEN_TO_BE_REPLACED

At ScienceOpen we’re pleased to announce yet another new publishing partnership with Cold Spring Harbor. Cold Spring Harbor Laboratory Press is an internationally renowned publisher of books, journals, and electronic media, located on Long Island, New York, USA. Since 1933, it has helped to advance scientific knowledge in all areas of genetics and molecular biology, including cancer biology, plant science, bioinformatics, and neurobiology.

Cold Spring Harbor Molecular Case Studies is an open access, peer reviewed, international journal in the field of precision medicine. Anyone can now freely browse, sort, and peer review any content from the journal using our advanced discovery engine. 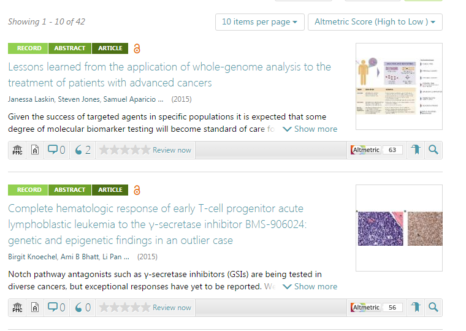 Articles display scores from Altmetric, and like all other open access content on our platform display the little OA logo. Integrated into our existing corpus of 26 million articles and article records, Cold Spring Harbor content will be put into context through our citation and recommendation network.

For more information about our indexing services, please contact our Marketing Manager Agata Morka (agata.morka@scienceopen.com). We are still running our free indexing competition for APC-free open access journals, so get in touch if you qualify!

Continuing our Open Science Stars interview series, today we’re happy to bring to you Graham Steel, a relentless campaigner for all things Open!

Hi Graham, and thanks for joining us here! Could you start off by letting us know a little bit about your background?

For 25 years, my background (as in day job) was dealing with insurance claims for various insurers, legal firms and service providers. In my spare time as of around 2001, I became involved in research/science outreach and as of now, I would class myself as an open science enthusiast. From Jan 2015 – August 2016, I acted as Community Manager (then Social Media Manager) for ContentMine.

In order, I first heard about open access late 2006, open science the following year and then open data. My initial thoughts were that all these entities were much needed and refreshing alternatives to all that I had seen or read about such topics up until then, i.e., closed access, prohibitive paywalls, “data not shown” etc.

You’re what some people call a ‘Patient Advocate’ – what is that, and what’s the story there?

The terms Patient Advocate and Patient Advocacy broadly speaking can mean a number of things. By definition, “Patient advocacy is an area of lay specialization in health care concerned with advocacy for patients, survivors, and carers”. For myself personally, this began in 2001 and mainly concerned bereaved relatives and then patients and their family members. See here for further details.

You relentlessly campaign for various aspects of open science – what drives you in this?

My means of background, I would say with certainty that during the period of around 2008 – 2011, the (sadly now deceased) social media aggregator site Friendfeed was the space in which the foundations for a lot of my current thinking were set out. Prior to that, having already been primed with open access and open data, that’s pretty much where open science really took off in earnest. Science and indeed research in the open is without question the way forward for all.

Science and indeed research in the open is without question the way forward for all.