Continuing our Open Science Stars interview series, today we’re happy to bring to you Graham Steel, a relentless campaigner for all things Open!

Hi Graham, and thanks for joining us here! Could you start off by letting us know a little bit about your background?

For 25 years, my background (as in day job) was dealing with insurance claims for various insurers, legal firms and service providers. In my spare time as of around 2001, I became involved in research/science outreach and as of now, I would class myself as an open science enthusiast. From Jan 2015 – August 2016, I acted as Community Manager (then Social Media Manager) for ContentMine.

In order, I first heard about open access late 2006, open science the following year and then open data. My initial thoughts were that all these entities were much needed and refreshing alternatives to all that I had seen or read about such topics up until then, i.e., closed access, prohibitive paywalls, “data not shown” etc.

You’re what some people call a ‘Patient Advocate’ – what is that, and what’s the story there?

The terms Patient Advocate and Patient Advocacy broadly speaking can mean a number of things. By definition, “Patient advocacy is an area of lay specialization in health care concerned with advocacy for patients, survivors, and carers”. For myself personally, this began in 2001 and mainly concerned bereaved relatives and then patients and their family members. See here for further details.

You relentlessly campaign for various aspects of open science – what drives you in this?

My means of background, I would say with certainty that during the period of around 2008 – 2011, the (sadly now deceased) social media aggregator site Friendfeed was the space in which the foundations for a lot of my current thinking were set out. Prior to that, having already been primed with open access and open data, that’s pretty much where open science really took off in earnest. Science and indeed research in the open is without question the way forward for all.

Science and indeed research in the open is without question the way forward for all.

You’re not exactly silent in your angst against some publishers for their business practices. What are the major issues that you have here?

With regards to the “angst” you mention, I have been become a more mature/level headed individual these days in this respect compared to a few years ago. Looking through my blog posts over the years, these have mainly been about ‘pro open’ issues rather than ‘bashing certain publishers’. As a prolific tweeter though, I may have put out <ahem> ‘a few’ ones where I have not exactly been ‘silent’ as you say.

How does social media play a role in your daily activities as an open advocate?

What is this thing called social media that you mention? Having joined Twitter in January 2008, initially I didn’t use it that much but that has certainly changed over time. “@McDawg posts an average of 53.51 tweets per day” according to one of many free online tools. Social media is pretty much essential for what I and many many others do pretty much everyday.

How does open access play into the bigger picture of open knowledge and open culture?

Great question! Firstly, I thought about a comment (in part) I made in an interview back in 2012. “OA itself however is just one cog (but a significant one) in the wheel of Open Science!!” In my mind, I don’t think it’s easy to ‘timeline’ as you were the onset and development of all things open. I’ve not studied free/open culture in vast detail myself. A good source in this area (not surprisingly) is Lawrence Lessig. See here for details. The history of open access dates back to around the 1950s. When ArXiv.org started in 1991 that was the precursor to what we know as open access today. In short, I would say that open access is a foundation stone to the grander scheme of things.

You’re a major player in communities such as OpenCon – what position do you think these play in the development of open initiatives across the planet?

I think it’s important to have a number of open communities/initiatives across the planet and that there should be synergy between them wherever possible. Specifically, OpenCon “was convened in response to incredible desire from the next generation to advance these issues.” [Open Access, Open Data, and Open Education]. Other than the annual OpenCon event which has taken place every year since 2014, the community hold regular calls online (open to anyone with an internet connection) as well as many satellite events around the planet before, during and after the main event each year. I am extremely encouraged by such activities.

You once said at OpenCon SpotOn London that getting younger students and researchers to practice open science was the real revolution – what did you mean by this?

What I meant by that is reflected by the answer to it. In context, that was a short comment I made when live-streaming a Panel Discussion, “What do you need to start a revolution?” in 2012 in London. VIDEO. Transcript of what I said:- “A question for Ethan (Ethan Perlstein) from an Open Science Enthusiast to an Open Scientist. What can we do to further encourage upcoming younger researchers to be open scientists? That’s the revolution!”

Ethan replied, “For sure. I mean to me, the first step was simply getting on Twitter and realizing there’s a community of solidarity out there ‘cause otherwise, you’re just stewing in your own thoughts. So that’s my definition of the first step. And then from there, people are going to have more specific interests and you’ll find a sub group within the larger community that you can then complement the social network activity with real face to face activity and then you can start to do important things. The only thing I can say is that you need to first find that community of solidarity and Twitter is the easiest way to find them.”

How can younger students commit to open research practices without the fear of career or scooping risk hanging over them?

In reverse order, the issue of scooping. My advice would be to get your work/data/code out there on the internet as quickly as possible. This could be via an Open Notebook, on GitHub, or somewhere within the many platforms of Wikipedia etc. In terms of research papers, there are now many options to choose from in terms of uploading a preprint of your work. With regards to the fear of career risk, be bold! Take a ‘wear open on your sleeve’ attitude. I can highly recommend watching Erin McKeirnan’s talk from OpenCon 2015. Also check out her project Why Open Research?. Also from that event, I would suggest watching Michael Eisen’s talk, Wear Open on Your Sleeve.

How have policies in the UK with regards to open science changed over the last few years? What do you think the most influential factors here have been? Do you think they are generally progressive policies?

This is a complex issue with so many players involved. When I first started to follow the UK’s position with regards to open access many years ago, most of the key research funders had a reasonably strong position on ‘encouraging’ open access. (The exception being Wellcome Trust who started mandating open access in 2005). That wasn’t largely effective (as elsewhere) which in part led to The Finch Group/Report around 2012. The outcome of Finch was a preference for Gold open access.

Since then, there have been influential factors by funders such as Wellcome Trust, the world’s largest medical research charity funding research into human and animal health. Wellcome’s progressive policies/position on open access can be found on various pages on their website such as here, here, and here. This year, they announced their own unique open access publishing venture, Wellcome Open Research which will start publishing research as early as next month.

I am also mindful of some salient responses from Jan Velterop when I interviewed him in 2012. “What always surprises me in these discussions is their national focus, whereas science is one of the most global enterprises on earth. The most positive developments for OA have been the greater awareness of it, even in the general media. Little else is new. And even attention to open access by the Guardian isn’t, as this article from February 2005 shows”.

What do you think the biggest impediments to open research are? How can we collectively combat or overcome them

First and foremost has to be Journal Impact Factor (JIF). This is despite an abundance of evidence which over the years has shown that this is a highly flawed metric. I would encourage academics to make enquiries within their Institutions to take a pledge and sign the San Francisco Declaration on Research Assessment, DORA. Secondly, as mentioned earlier, embrace the fact that it takes very little effort these days to get a preprint of your work archived on the web.

I would encourage academics to make enquiries within their Institutions to take a pledge and sign the San Francisco Declaration on Research Assessment, DORA

What tools or platforms would you recommend to researchers looking to get into open science?

There are so many these days, where does one start? The best resource out there at present (I am not alone in this view) is Innovations in Scholarly Communication (now available in seven languages) created by Bianca Kramer and Jeroen Bosman. Also see https://innoscholcomm.silk.co/ which is super awesome.

Where do you see the future of scholarly communication? What steps are needed to get there? Whose responsibility do you think it is to lead this change?

I don’t have the answers to those myself. As of the time of writing, I would highly recommend Open Science Framework. I am moving more and more in the direction of advocating preprints for any paper with optionally, publication in journals later. 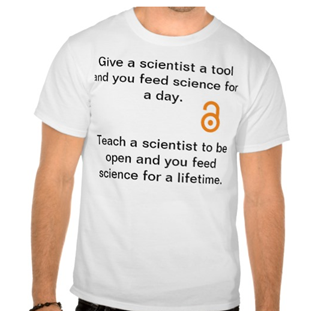 Thanks for the great interview, Graham!